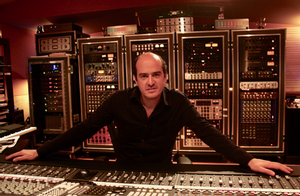 He is worldwide recognised for his versatility and talent in developing and working with all kind of talent in every genre of music. He has produced, recorded and mixed just about any type of music you can imagine: pop, rock, R&B, orchestral recordings, opera, big band, R&B, dance, jazz, gospel, soul, hip-hop, mariachi, choral, film/TV soundtracks and movie scores.

Rafa’s love for music began at an early age playing guitar and attending recording sessions in his native Spain. A live sound stint with folk, jazz and world artists in Northern Spain and South of France led him to the United States. He landed an engineering position at the legendary Ocean Way Recording Studios in Hollywood and Record One Studios in Los Angeles. Rafa had the unique opportunity to work with world reknowned artists on a daily basis: from Natalie Cole to the Black Crows, Celine Dion, Greenday, Madonna, The Rolling Stones, Red Hot Chili Peppers, Frank Sinatra, the pre-recording of The Academy Awards and worked on numerous movies. Rafa’s intuition to move to Los Angeles proved to be one of the most rewarding synergies of his life.

Rafa founded Fishbone Productions in 2001. He built his studio “Afterhours Studios” from the ground up with artist’s need in mind. “AfterHours Studios” were featured in Mix Magazine’s Class of 2017 list of most innovative studios of the year.