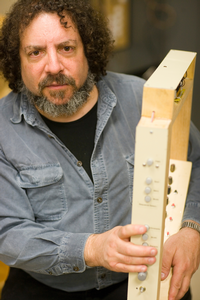 Paul Lehrman is an internationally-known writer, musician, composer, and educator who has been teaching music technology at the college level for over 30 years.

He has been a columnist for Recording Engineer/Producer, Piano & Keyboard, and Mix magazines, and a contributor to Wired, Computer Music Journal, Studio Sound, Electronic Musician, Keyboard, and a dozen other magazines. His six books include “MIDI For The Professional,” which remained the standard college-level text on MIDI for over 20 years. He has consulted and written documentation for Yamaha, Roland, Kurzweil, JBL, AKG, and many other companies; directed research for Steinway, Zildjian, and QRS Music; and served as executive director of the MIDI Manufacturers Association.

His compositions have been featured in films for PBS, A&E, History Channel, and France 3. His computerized realization of George Antheil’s 1924 “Ballet mécanique” has been performed over 30 times on four continents, in venues including Carnegie Hall, Boston Symphony Hall, Davies Hall (San Francisco), Royal Festival Hall (London), and the National Gallery of Art.

Since 2000 he has been on the faculty of Tufts University, where he received his PhD, and where he is currently a Senior Lecturer in Music and Director of the Program in Music Engineering. He has also taught in the Sound Recording Technology program at the University of Massachusetts Lowell, and in the Computer Music & Multimedia program at Brown University. His students have gone on to careers with companies like Akai, Apple, Avid, Bose, EchoNest, Google[x], Harmonix Music, IBM, iZotope, Kurzweil, Microsoft, MOTU, ROLI, and Sonos.