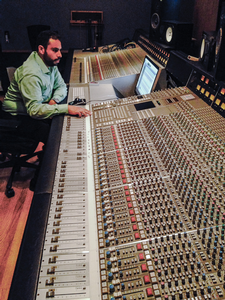 Andrés holds a Sound Engineering Degree with honors from the University of San Buenaventura. For over 15 years he has worked as a live sound, recording and mixing engineer, and electroacoustic designer. He was hired in 2007 by Challenger in the R&D Department to design electroacoustic devices and elaborate protocols to improve design/install processes. In parallel, designed and executed sound installation projects for several architectural spaces such as shopping centers, cafes, offices, and bars.

From 2008 to 2014 worked at the Teatro de Bellas Artes coordinating the areas of sound, lighting and stage machinery for over 900 shows. Performances of opera, ballet, orchestra, zarzuela, folkloric/contemporary dance, jazz, and musicals, among others. He also provided technical assessments for the improvement of technical equipment and infrastructure. In addition, he led the technical production for renowned artists like Jarabe de Palo (Spain), María Creuza (Brazil), Totó la Momposina (Colombia), and many others. He has recorded and mixed artists like Flora Martínez, The Hall Effect, Burning Caravan, Meteor, Felicia Falck, Minük, Lia Castillo, and more.

Andres has been an AES member for over 10 years, actively participating in the AES International Convention since 2009. In 2010, he joined the production committee for the 4th AES Latin American Conference and since 2013 he has served as the Chair of the AES Colombia Section. He founded and directed the 1st Diffusion Magazine Convention, the largest event audio related in Colombia, with over 40 national/international renowned speakers. Furthermore, he has produced, directed and collaborated with over 90 academic events in the region along with key AES members such as John Storyk, Mark Waldrep, Wes Dooley, and Vance Powell. In 2016 Andres chaired the AES Latin American Conference for which he received the AES Board of Governors Award and from 2017 he has chaired the AES Mexico Student Recording Competition.

As the AES Colombia Section Chair, Andrés has led an unprecedented number of conferences, workshops and panels in the country. Over 60 events have greatly increased AES' visibility in Colombia, gathering more than 6,000 participants in less than 4 years. The AES Colombia Section has grown 500%, offering new benefits to local members, creating the Featured Members campaign, reactivating and creating new student sections, and leading the AES Student Recording Competitions with over US$10,000 in prizes. Moreover, Andres actively proposes AES Colombian panelists in global conferences and conventions, strengthening connections between key AES members in the country and the international AES community.

In 2009 Andrés founded Diffusion Magazine, for which he is currently Director and active contributor. Diffusion has grown to become the most important Sound Engineering online platform in Latin America, with an average of 30,000 monthly visitors from over 90 countries and 900 cities. He regularly writes articles and reports for Ingenium, La Casetería, and the AES Journal. Furthermore, Millán is the Founding Director of Boutique Pro Audio, an enterprise commercializing high-end products from manufacturers including AEA Microphones, Earthworks, ATC Loudspeakers, Burl Audio, Bricasti Design, Cloud Microphones, elysia, Metric Halo, and more.