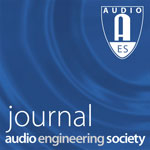 This podcast describes the contents of each issue of the Journal of the Audio Engineering Society.

The AES is now offering our members a limited number of audio (or video) recordings from section meetings around the world. You will find these recordings attached to the bottom of each of these meeting reports:

• District of Columbia: Live Sound for Jazz (and other acoustic music) (September 1, 2009)

If you have comments about this project or these recordings please contact us.