Abstract:
Industry media mainstay Mr. Bonzai and his special guests, Jack & Blake Douglas kick-off the AES Special Events calendar with a first-morning wake-up dialog, talking music, motivation, and music industry trends and prognostications. Legendary producer/engineer Jack Douglas got his start at Record Plant in NYC as a janitor, and within a few short years was working with John Lennon, Cheap Trick, and Aerosmith. His son Blake is a successful engineer (Nas, Common, No ID), production consultant, and studio designer. 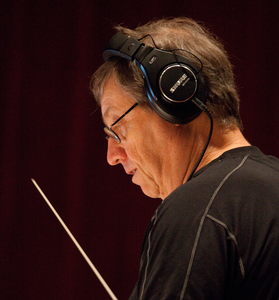 This year's keynote speaker is Ron Jones. The title of his talk is "Remember the Human Receptor on the Road to the Future."


Abstract:
The Audio Engineering Society brings together the top-notch music producers and engineers from the Latin scene. Multiple Grammy-winning pros will present an in-depth look at their latest recordings and will open the debate for Q&A from the audience.

Monitoring in the Studio or on the Road—Using New Technologies


Abstract:
Loudspeakers transition to headphones which transition to in-ears. Your environment changes but your workflow and sound does not. It’s a constant evolution where you work and what project. An engineer knows their room but has to mix in someone else’s or a hotel room. What do you do to ensure a reference that connects the environments? In addition to the various types of studio(from near field to mains) there are great headphone and in-ear monitoring solutions. Find out how to use and maximize all of these technologies and what is best for you.

RP4 - Implementation & Mixing for VR Games as Both Art & Science


Abstract:
Implementing and mixing music and sound for VR games raises many technical and artistic questions. Realism is not always the end-goal as the sonic aesthetics must match the game play in order for the experience to feel cohesive. There is no one correct way to go about this just as there are various tools that can achieve the same or similar results. This panel will explore both the variable aesthetics at play as well as discuss some of the latest platform, middleware and plug in developments being used to achieve them. Topics of discussion will range from implementation of ambisonic and binaural spatialized audio to non-spatialized audio placement, appropriate soundscapes and ambiences, room and environmental effects, suitable volume levels for long term listening, diegetic use of music, and effects such as occlusion through filtering, equalization, and distortion. 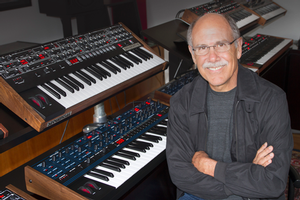 Musical synthesizers first appeared in the 1960s – large modular beasts covered with cables. In the early '70s, portable monophonic instruments became available, leading to a gradual acceptance by musicians in popular music. In the late '70s, fully programmable polyphonic analog synths came out, and the synthesizer went mainstream. Things changed dramatically in the '80s as digital synths appeared: first the FM-based DX-7 and eventually the M-1 sample playback synth. From that point onward, digital was the norm. In the '90s, digital synths continued and were implemented in software as computers gained enough power for native signal processing. For 25 years, analog synths were generally not available. Things have changed in the last 10 years, though. Musicians started searching for old analog synths and began using them again. New analog synths became available. Modular synths are back, and very popular. Throughout this 50-year history of the synthesizer its impact on music of all genres has been very significant.

Please note: the Organ Concert start time has been delayed to 8:15 pm so that Heyser attendees could also attend the Organ concert if they so wished (and vice-versa). 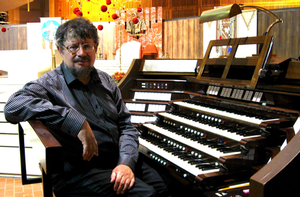 
Abstract:
Graham Blyth will once again be performing for the 141st Convention. The concert will take place at the First Congregational Church of Los Angeles, 540 South Commonwealth Ave.

There will be one shuttle bus that departs the LACC at 7:35 pm.
How to get there via other methods: https://aes141la.wordpress.com/the-organ-concert/

The program will include: •Buxtehude: Prelude and Fugue in D; •Bach: Trio Sonata No. 6; •Bach: Passacaglia and Fugue; •Franck: Fantasie in A; •Pierné: Prelude from Three Pieces; •Boellmann: Suite Gothique

OK, You Did Not Get the Gig at the Studio. Where Are the Jobs?


Abstract:
You have all this great training and developing skillsets. Where are the jobs? There are plenty out there. You need to think a little differently. These presenters will talk about different related fields.

GRAMMY, EMMY, OSCAR, Super Bowl, NFL, NBA, MLB, NASCAR, live broadcasts that capture a global audience with myriad moving parts and zero margin for error. Going live with tens of millions of viewers hanging on every note and play, there are no second chances to get it right. Join members of the most experienced broadcast audio teams in the business as they pull back the curtain on the most technically advanced and logistically challenging audio productions on the planet.


Abstract:
Some of the most important and influential recordings of all time were created in British studios during the 1960s and 1970s—iconic places like Abbey Road, Olympic, Trident, Decca, Pye, IBC, Advision, AIR, and Apple.  This presentation will unravel the origins of the so-called "British Sound" and celebrate the people, equipment, and innovative recording techniques that came out of those hallowed halls, including rare photographs, videos, and musical examples.


Abstract:
This panel addresses the invisible barriers and challenges that keep an individual from rising beyond a certain level in their career — the so-called “glass ceilings” encountered by women, minorities and industry outsiders of all types. Panel topics include how to get started in the industry, determining if you are on the right path, how to advance your career, equal pay for men and women, and more. Breaking The Audio Ceiling panelists include a wide range of men and women with unique perspectives, from seasoned executives to those just starting out in the industry.


Abstract:
A platinum panel of renowned engineers will discuss the key elements of the creative & technical process that they apply as they work with a wide range of artists in all popular music genres. We will be playing examples and taking questions from the audience.


Abstract:
The explosion in streamed-content delivery to fixed and mobile devices has accelerated the adoption of advanced audio services for television. These offer immersive sound, enhanced personalization, and improved bandwidth efficiency. Cinema-quality immersive soundtracks are now starting to show up on popular streaming platforms. At the same time, the VR craze is driving interest and innovation in personalization and virtualized surround sound on mobile devices.

How is Hollywood coping with streamlining object workflows for episodic production? What tools are being developed to manage the demands of both live and pre-produced content? While next-generation audio systems are becoming more widely deployed, a great deal of content is still being pushed through outdated format-and-dynamic-range-limited encoding workflows. How do we manage the loudness and consistency issues this creates? Can cinema-like television experiences coexist in the same content universe with cat videos and tornado alerts?

Discussion topics will include:

The Impact of VR and Gaming on Immersivity and Personalization in Television
VR is the ultimate personalized immersive experience. How will technologies and trends driven by VR re-calibrate our thinking about television sound? Viewer-driven object-audio-enabled surround experiences have stable and long-established workflows and production practices in gaming. Is it time for television content creators to look around at personalized entertainment platforms and take some lessons?

Object Audio Deliverables and Emerging Tools for Interchange and Content Management
As content creators ramp up the production of premium immersive audio content for online delivery, are scalable workflows in place to absorb and manage this content on the distributor side? We will explore the progress on universal interchange standards and practical mezzanine deliverables, and discuss future requirements for versioning and editing for re-exploitation.

The challenges of Loudness Management in Multi-Platform Streamed-Content Delivery
As the center of gravity for television viewing shifts to an online experience, are the best practices for loudness, dynamic range and format management in danger of being lost along the way? Can a line still be drawn between fixed and mobile or desktop streaming? How do content preparation and audio encoding processes need to catch up? Our panelists will discuss the challenges of bring the same commitment to consistency and quality from network linear television to the online experience.

Atmos Mixing for Episodic Television
This fall, post-production of premium episodic content in advanced surround is in full swing. With dubbing stages all over Hollywood filling up with Atmos productions, how are mix teams adapting cinema audio production values to television budgets and timelines.

Wireless Spectrum Update
With the first forward-auction round completed, how is the future UHF spectrum picture shaping up? Initial clearing targets would make UHF microphone operation virtually impossible in many areas. Wherever we end up, things are going to get a lot more crowded. We will indulge in some speculation on the final band plan and examine the limited relocation options.


Presenters and Panelists Include:


Abstract:
This panel addresses the challenges to restore degraded or damaged media assets including those affected by binder hydrolysis (sticky shed), tape binding adhesion (NOT sticky shed), mold, water damage, bent flanges, de-spooled pancake, salt residue, glue seep, splice repair, lubricant loss, static discharge and acetate spoking. The work-shop will discuss asset degradation encountered by an esteemed panel of archival engineers and the remediation processes developed and used to restore playback. Advancements in audio technology and tremendous changes in how the entertainment industry creates and monetizes content have challenged the engineers to accommodate requests to migrate, mix, master, store and distribute that content securely. Moderated by Bob Koszela of Iron Mountain Entertainment Services Digital Studios (who preserves over 28 million assets for its customers), the panel will show examples of various types of degradation to a wide range of audio formats.


Abstract:
A platinum panel of renowned mastering engineers will discuss the creative & technical process behind selected recent work. We will focus on those details that are important to various consumer release formats. We will be playing examples and taking questions from the audience.

Hi Res Audio and Soccer Moms—How Are They Related and How Will People Be Getting Their Music in the Future?


Abstract:
Both consumer electronics manufacturers and music professionals both have clear objectives and they are not necessarily in harmony and perhaps in conflict. Does Hi Res matter and can the majority of the people hear the difference? What is the disconnect between the record companies, the consumer manufacturers, and the consumer? What are the new music delivery technologies in the future? How will that draw in fans? Where is music delivery going?


Abstract:
Follow the process from concept to “fade to black” as Mark King shares the methods and techniques of mixing television's most challenging live broadcast of Grease Live. 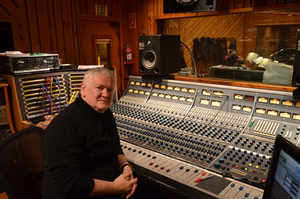 Sammy Nestico, The Soldier Sessions with the US Army Jazz Ambassadors - in Surround


Abstract:
Noted composer and arranger Sammy Nestico has had a long career in the television and film industry. He has arranged and conducted projects for artists such as Bing Crosby, Sarah Vaughan, Toni Tennille, Frank Sinatra, Phil Collins, Barbra Streisand, and Count Basie, among others. As orchestrator, he has worked on nearly 70 television programs, including "Mission: Impossible," "Mannix," "Charlie’s Angels," and "The Mod Squad." With the US Army Jazz Ambassador’s release, The Soldier Sessions, Mr. Nestico has gone back to his roots as big band arranger and composer and created 12 new charts for the recordings. Producer/Engineer, Jim Anderson, will present 5.1 mixes performed by America’s Big Band.


Abstract:
MIDI was designed for much more than enhancing and controlling music. Knowing how to use MIDI will help you further your career. Learn how it is used in the studio and live productions and concerts.