More than 300 million pairs of headphones will be sold in 2015 as consumers everywhere are using headphones to enjoy music, infotainment and communicate with people on their mobile devices.  With this new market growth has come a resurgence in headphone research and development, much of it  focused on how to best optimize headphone sound quality for different applications.  A key problem is defining what is good headphone sound quality, and how to accurately and reliably measure it.  Some of the most fundamental research questions related to this problem include:

Below is  a collection of  25 headphone papers from the AES e-library  that largely focus on these five research questions.  The papers are listed in descending chronological order according to the date of publication, and cover a time span over the past  32 years.  In reading these papers, the reader should develop an increased awareness of  issues and challenges in defining and measuring headphone sound quality. Fortunately, there is good progress being made.

Unfortunately, this collection has omitted many excellent headphones papers in the AES e-library  that fall outside the scope of this narrow topic. They include important topics related to headphones used in binaural signal processing (e.g. binaural synthesis, virtual surround), acoustic modeling and simulation, headphone design, and many others. The reader is encouraged to seek out these papers in order to get a broader perspective of how headphone performance impacts these different applications. 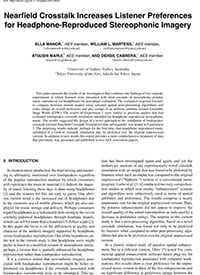 Although final mixing and mastering is monitored over loudspeakers, the majority of music listeners use headphones on mobile devices. Preferences for spatial process depend on the method of reproduction. For a variety of program material using headphones, listeners often prefer a stereophonic image that is created by simulating nearfield crosstalk compared to the biphonic spatial image. This novel approach, called Nearfield Crosstalk Simulation, describes crosstalk that simulates closely located loudspeakers. Previous work used farfield crosstalk simulation in an effort to produce an enhanced stereophonic effect, but such results were less preferred. The primary difference between the more conventional farfield crosstalk and the novel nearfield crosstalk developed for this study was the introduction of a level and a time difference at low frequency, consistent with what actually occurs for sound sources very close to a listener’s head. 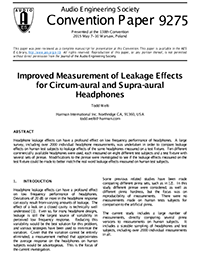 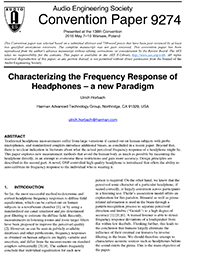 Traditional headphone measurements suffer from large variations if carried out on human subjects with probe microphones, and standardized couplers introduce additional biases, as concluded in a recent paper. Beyond that, there is no clear indication in literature about what the actual perceived frequency response of a headphone might be. This paper explores new measurement methods that avoid the human body as much as possible by measuring the headphone directly, in an attempt to overcome these restrictions and gain more accuracy. Design principles are described in the second part. A novel, DSP controlled, high-quality headphone is introduced that offers the ability to auto-calibrate its frequency response to the individual who is wearing it. 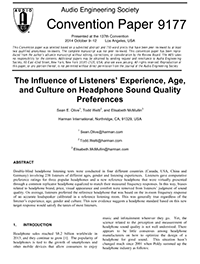 Double-blind headphone listening tests were conducted in four different countries (Canada, USA, China, and Germany) involving 238 listeners of different ages, gender, and listening experiences. Listeners gave comparative preference ratings for three popular headphones and a new reference headphone that were all virtually presented through a common replicator headphone equalized to match their measured frequency responses. In this way, biases related to headphone brand, price, visual appearance, and comfort were removed from listeners’ judgment of sound quality. On average, listeners preferred the reference headphone that was based on the in-room frequency response of an accurate loudspeaker in a reference listening room. This was generally true regardless of the listeners’ experience, age, gender, and culture. This new evidence suggests a headphone standard based on this new target response would satisfy the tastes of most listeners. 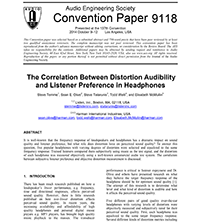 It is well-known that the frequency response of loudspeakers and headphones has a dramatic impact on sound quality and listener preference, but what role does distortion have on perceived sound quality? To answer this question, five popular headphones with varying degrees of distortion were selected and equalized to the same frequency response. Trained listeners compared them subjectively using music as the test signal, and the distortion of each headphone was measured objectively using a well-known commercial audio test system. The correlation between subjective listener preference and objective distortion measurement is discussed. 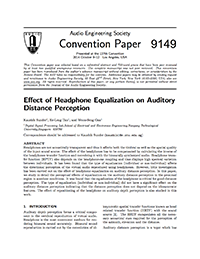 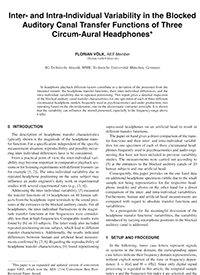 When using headphone playback, there are many factors that contribute to variations of the intended stimuli: errors in headphone transfer functions, their inter-individual differences, and the intra-individual variability due to repeated positioning. This report provides a detailed evaluation of the blocked auditory canal transfer characteristics for one specimen of each of three different circumaural headphones frequently used in psychoacoustics and audio production; two headphones based on electrodynamic, one headphone based on an electrostatic converters. Depending on the headphone, results showed inter-individual variations up to 10 dB in the blocked auditory canal entrance headphone transfer function magnitude spectra and 0.5 ms in the corresponding group delays, especially at frequencies above 6 kHz. At lower frequencies, 2 dB and 0.1 ms were measured. This general behavior is comparable for all three headphone specimens, but each model shows specific peculiarities of the headphone transfer function magnitude and group delay. For all headphones studied, the inter-individual magnitude spectrum variability exceeded the average intra-individual variability. 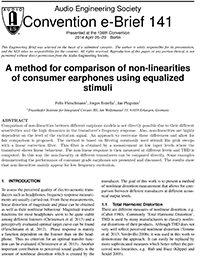 Comparison of nonlinearities between different earphone models is not directly possible due to their different sensitivities and the high dynamics in the transducer's frequency response. Also, nonlinearities are highly dependent on the level of the excitation signal. An approach to overcome these differences and allow for fair comparison is proposed. The method is based on filtering commonly used stimuli like pink sweeps with a linear correction filter. This filter is obtained by a measurement at low input levels where the transducer shows linear behavior. The nonlinear response is then measured at different levels and THD is computed. In this way the non-linearity or different transducers can be compared directly. Some examples demonstrating the performance of consumer grade earphones are presented and discussed. The results show that nonlinearities mainly appear for low frequency excitation. 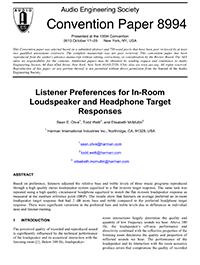 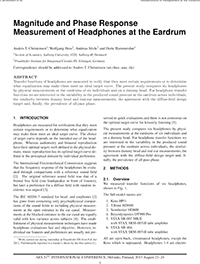 Transfer functions of headphones are measured to verify that they meet certain requirements or to determine what equalization may make them meet an ideal target curve. The present study compares six headphones by physical measurements at the eardrums of six individuals and on a dummy head. For headphone transfer functions we are interested in the variability in the produced sound pressure at the eardrum across individuals, the similarity between dummy head and real-ear measurements, the agreement with the diffuse-field design target and, finally, the prevalence of all-pass phase. 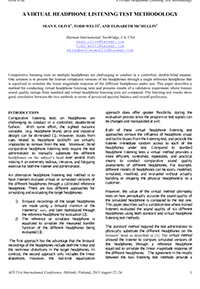 The Acoustics and Psychoacoustics of Headphones
Paper C1006; AES Conference: 2nd International Conference: The Art and Technology of Recording; May 1984
Toole, Floyd E.