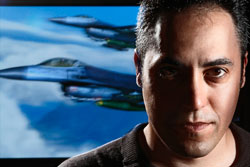 Leveling Up Game Audio Implementations: Chair:Scott Selfon, Microsoft Corporation and panelists: Scott Gershin and Gene Semel will address theconundrum of delivering 40+ hours of interactive, dynamic, game audio to a download, portable, or disc-based title. Issues include: reference level standards in an environment where mixing occurs in real time, and how to get real-time DSP effects out of  the gear and into the game, so the players hear what the creators produce.

The Wii Remote as a Musical Instrument -Technology and Case Studies:  Paper by Paul Lehrman: Wiimote, theinexpensive, remote for Nintendo’s Wii Game System will be scrutinized. Using a combination of technologies highly suited for music generation and control including position tracking, tilt and motion measurement in three dimensions, the two-dimensional joystick (with its companion "Nunchuk,") and multiple buttons, the unit is ubiquitous. Lehrman will discuss the system in two musical contexts: controlling an electronic orchestra performing classical repertoire, and creating a new type of multi-parameter, multi-user synthetic instrument.