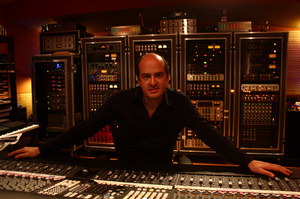 Symphonic Soweto, a Tribute to Nelson Mandela' won the SAMA (the South African equivalent of the Grammy) for Best Adult Contemporary Album in 2018.

Rafa Sardina is currently serving as Governor for the Los Angeles Chapter of the Grammy’s, as well as been appointed Chairman of the Producers & Engineers Wing at the Grammy’s, Trustee of the Latin Grammy’s and Vice-Chairman & Founding Member of the CPI (Circulo de Productores e Ingenieros), the equivalent organization representing Producers & Engineers in Latin America, Brazil, Spain & Portugal.

He also served in 2017 as the Executive Producer & Music Producer of the Latin Grammy’s Person of the Year dinner gala, honoring Alejandro Sanz for his outstanding career & will Produce the upcoming 2018 event.

Rafa’s “AfterHours Studios” were featured in Mix Magazine’s Class of 2017 list of most innovative studios of the year.

As a musician, engineer and producer Rafa connects easily with artists and has tremendous respect for creating a studio vibe that's performance-friendly for both new and established talent.