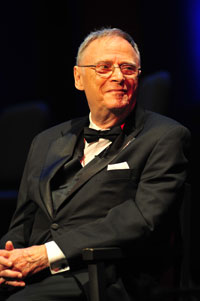 NEW YORK: Audio Engineering Society Awards Committee Chair Wieslaw Woszczyk (ve slaw voz chek) has announced the recipients of Awards to be presented at the 127th AES Convention Opening Ceremonies at NY’s Javits Center on Friday, October 9. “Our members hold historical and current events in equal esteem,” Woszczyk remarked. “The Awards pay tribute to originators of past technological and creative accomplishments and to members who have devoted extraordinary time and energy to significant AES initiatives.”

This year’s presentations exemplify the breadth of these achievements. Among the recipients of the Board of Governors Fellowship Awards is engineer Rudolph ‘Rudy’ Van Gelder, recognized for five decades of exceptional recordings of such legendary jazz artists as Miles Davis, John Coltrane and Sonny Rollins.

“On the other end of the time line,” Woszczyk said, “is a Board of Governors Award to the AES Web Development Group. Team leader Nick Zacharov; webmaster Steve Johnson; graphic designer Josh Tidsbury and copywriters Peter Cook and Michael Fleming will be recognized for re-designing this integral component for maintaining the AES position as the forum for technical dialogue within the international professional audio community.”

The AES BOARD OF GOVERNORS AWARD will also be presented to:

THE FELLOWSHIP AWARD Presented to members who have rendered conspicuous service; recognized for having made a valuable contribution to the advancement in or dissemination of knowledge of audio engineering or in the promotion of its application in practice. In addition to Rudolph Van Gelder, the 2009 Award is presented to:

Shawn Murphy: For outstanding contributions to the craft of recording and mixing of film music, and to the advancement of surround sound experience in cinema

Ray Rayburn: For contributions to the art and science of sound system design, digital signal processing, routing and electromagnetic compatibility

Daniel Weiss: Forvaluable contributions to the advancement in engineering practice and applications in the fields of digital audio mastering and signal processing

THE SILVER MEDAL AWARD Established by the Society in 1971, in honor of audio pioneers Alexander Graham Bell, Emile Berliner and Thomas Edison, in recognition of an outstanding development or achievement in the field of audio engineering. Presented this year to:

THE DISTINGUISHED SERVICE MEDAL AWARDestablished by the Society in 1991, is given in recognition of extraordinary service to the Society over a period of more than ten years. This award is presented to:

Irv Joel: For his many years of service to the New York Section; to AES Conventions both as a committee member and contributor; to the Historical Committee and in particular the Oral History Project. And, to the Standards Committee, of which he was a founding member

Han Tendeloo: In recognition of significant service and contributions to the development and management of the society, sustained over more than 30 years.

Emil Torick: In recognition of 50 years of outstanding service to the Society, including 25 years as president of the AES Education Foundation

“AES Awards hold great meaning for our members,” concludes AES president Jim Anderson. “Each award is carefully considered by the Board of Governors. They are highly prized because they are based on merit and accomplishment alone.”

The 127th AES Convention will be held at NY’s Jacob Javits Convention Center October 9 – 12, 2009. A Preliminary Calendar of Events is posted at http://www.aes.org/events/127/

Photo: Rudolph Van Gelder, will accept the AES Board of Governors Fellowship Award