AMSTERDAM: Marking the 60th Anniversary of the Audio Engineering Society, the annual AES European Pro Audio Expo and Convention will be held in the Amsterdam RAI International Exhibition and Congress Center May 17-20. Executive Director Roger Furness reports that “a broad technical program and exhibits will be presented under the banner theme, ‘New Horizons In Audio.” 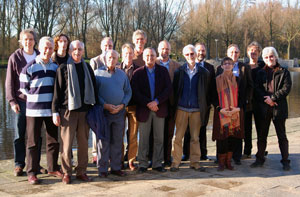 The technical program developed by the 124th AES Committee represents the multiplicity of occupations, fields of interest and concerns in today’s pro audio community. Live sound, recording, broadcast and post-production audio engineers, as well as equipment designers and enthusiasts will find the events, papers and workshops filled with topics of great relevance

In keeping with increased demand for high-quality sound reinforcement reflected by new opportunities in the live sound, touring and corporate markets, expanded events and workshops are focused on this sector. Presentations will range from microphones and loudspeaker systems through mixing consoles and increasingly important digital networks. Held in their own hall at the RAI, Live Sound workshops will be led by such industry leaders as: Eberhard Müller (Neumann & Müller), Jürgen Wilhelm (Yamaha), Gregor Zielinsky (Sennheiser) and Ralf Zuleeg (d & b).

The 124th AES Committee has dedicated a significant portion of the technical program to Broadcast Audio. Workshops such as Spatial Audio and Sound Design In Sports and Loudness A Change of Paradigms will explore new practices in audio for HDTV and broadcast audio levels. Papers and tutorials will cover standards and innovations that impact broadcast audio professionals.

Multi-Platinum recording engineer Geoff Emerick will present a special Making-Of Sgt. Pepper’s Lonely Hearts Club Band film commissioned by the BBC to celebrate the 40th anniversary of its first release. “It is a unique coincidence that the AES was twenty years old the year Sgt. Pepper was released” Roger Furness remarked. This historic event is certain to be an unforgettable highlight of the 124th Convention.”

As a 60th Anniversary Celebration, bonus, the AES is offering fifty full program passes to the 124th Convention. To enter the drawing visit www.aes.org/events/124/quiz/ , and take the AES challenge, "QUIZ AES."

Now celebrating its 60th anniversary, the Audio Engineering Society was formed in 1948 by a group of concerned audio engineers. With over 14,000 members throughout the U.S., Latin America, Europe, Japan and the Far East, the AES serves as the pivotal force in the exchange and dissemination of technical information for the industry. For additional information visit http://www.aes.org