Reverb Collection by Alex U. Case 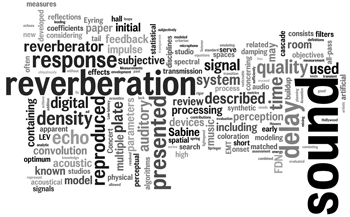 I have dedicated my professional life to the study of aesthetics, perception, signal processing, electro-acoustics and room acoustics for the creation and enjoyment of recorded music. FX are a particularly important point of focus -- and fun. I write and lecture (particularly at AES events) on all forms of signal processing for sound recordings: EQ, distortion, compression, expansion, delay, pitch shift, time reversal, timbre, space, and -- of course -- reverb. The AES has been the source of information on the topic, from first principles to cutting edge research, documenting recent trends and fascinating history. Naturally, for AES E-Library resources on Reverb, my Top 10 List goes to 11.

Artificial reverberation for audio begins in earnest with Schroeder's seminal paper in 1961. You can easily repeat his research on your own, building his first reverberators with tape delays, guitar pedals, and/or in software. Thinking of doing it yourself? I'm inspired by the Synthetic Reverberator (1960!) by Olson, and the Digital toolset articulated by D'Attorro. An interest in reverb for sound recordings should be influenced, at least in part, by Concert Hall Acoustics, and Beranek lays it all out beautifully. For smaller-than-concert hall spaces that reverberate, add loudspeakers and microphones for a reverb chamber; Bayless' paper on the Capitol Studios is an inspiration, for chambers and more. Concert Halls and Reverb Chambers offer acoustic sources for reverberance. How about mechanical resonances? Spring and Plate Reverbs have proven so sonically useful that they have made the migration to digital, as shown in the papers by Valimaki and Abel. Latency of internet connections can serve as the delay-based building block for reverb via the web, as Chafe shows. How cool is that? Users of reverb must listen for unwanted artifacts that can accompany resonance. Spectral coloration is a key concern and is analyzed rigorously by Rubak. Meantime, Rumsey helps us speak with more precision about the important but often ill-defined qualities associated with spatial perception. Finally, the whole topic is thoroughly assessed and nicely summed up 4 decades after Schroeder's first paper by Blesser. 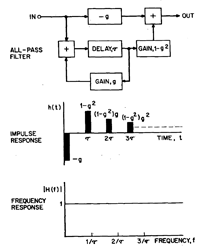 Electronic devices are widely used to introduce in sound signals an artificial reverberation subjectively similar to that caused by multiple reflections in a room. Attention is focused on those devices employing delay loops. Usually, these devices have a comb-like frequency response which adds an undesired -color- to the sound quality. Also, for a given reverberation time, the density of echos is far below that encountered in a room, giving rise to a noticeable flutter effect in transient sounds. A class of all-pass filters is described which may be employed in cascade to obtain -colorless- reverberation with high echo density. 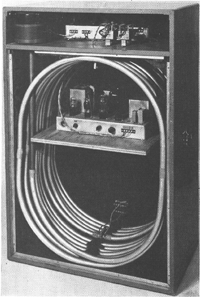 The reproduction of sound may be enhanced by the addition of artificial reverberation when the reproduced sound is below the optimum value of reverberation. Reverberation consists of multiple reflections in which each pencil of sound suffers a decrease in intensity with each reflection. This may be simulated by passing the reproduced sound through a series of transducers with progressive delay and attenuation. A synthetic reverberator has been developed with a loudspeaker, pipe, and microphone delay unit in combination with a feedback system. 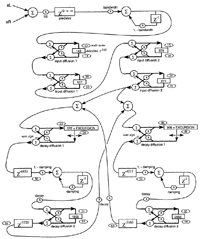 The paper is a tutorial intended to serve as a reference in the field of digital audio effects in the electronicmusic industry for those who are new to this specialization of digital signal processing. The effects presented are those that are demanded most often, hence they will serve as a good toolbox. The algorithms chosen are of such a fundamental nature that they will find application unbiquitously and often. 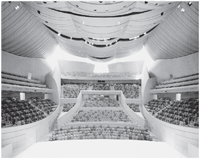 A comprehensive review of concert hall acoustics shows a clear relationship between measurements and perceived quality among listeners, conductors, and musicians. While the basic Sabine and Eyring equations are still important for determining reverberation times, there are other measures that are also important. These include rise and decay of sound energy, early decay at mid-frequencies, lateral fraction, binaural quality index, perceived loudness, listener envelopment, and others. These measures must be connected to the subjective ratings of concert halls that have been accumulated over the years. The principles are illustrated with case studies that compare the shoebox shape to the surround design. 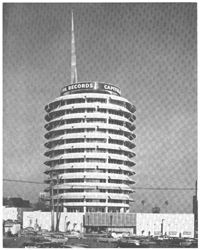 Designed from the ground up for optimum electrical, mechanical, and acoustical characteristics for the production of recordings, the Capitol studios in Hollywood represent many advances in studio design. The objectives in planning the studios, and the methods used to achieve the objectives, are described. 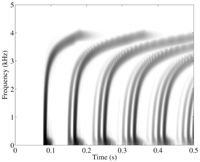 The unique sonic quality of spring reverberation, and its historical importance in many musical genres, motivated implementing this sound with modern digital signal processing techniques. Spring reverberation produces chirplike responses. Rather than attempt to reproduce the physical vibrations of springs, this research uses a parametric model to duplicate their sound. The basic model consists of a spectral delay filter placed into a feedback loop with a long delay line and a selectable loop gain. A delay line is modulated with a strongly correlated random-number sequence. Parameters such as delay time, chirp shape, and decay rate can be adjusted. 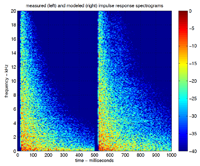 A digital emulation of the Elektromesstechnik (EMT) 140 plate reverberator is presented. The EMT 140 consists of a signal plate and a moveable damping plate; it is approximately linear and time invariant, and its impulse response is characterized by a whip-like onset and high echo density. Here, the hybrid reverberator proposed by Stewart and Murphy, in which a short convolution is run in parallel with a feedback delay network (FDN), is used to model the plate. The impulse response onset is only weakly dependent on the damping control, and is modeled by the convolution; the FDN is fit to the impulse response tail. The echo density, equalization and decay rates are matched at the transition between the convolution and FDN.

Low-latency, high-quality audio transmission over next-generation Internet is a reality. Bidirectional, multichannel flows over continental distances have been demonstrated in musical jam sessions and other experimental situations. The dominating factor in delay is no longer system issues, but the transmission time bounded by lightspeed. This paper addresses a method for creating shared acoustical spaces by "echo construction." Where delays in bidirectional paths are sufficiently short and "room-sized," they can be used to advantage as components in synthetic, composite reverberation. 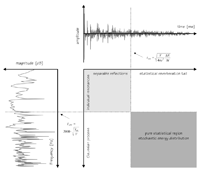 A literature review concerning perception of coloration is presented. In the paper we also present a review of general psycho acoustic background material concerning auditory modeling including perception of timbre and amplitude modulation. Furthermore, some classical room acoustic measures for echo perception are considered. Finally, some of the simple engineering measures to rate coloration is evaluated and an auditory signal processing model including a combined time-frequency detection criterion is presented.

Spatial quality in reproduced sound is a subset of the broad topic of sound quality. In the past it has been studied less rigorously than other aspects of reproduced sound quality, leading to a lack of clarity in standard definitions of subjective attributes. Rigor in the physical measurement of sound signals should be matched by equal rigor in semantics relating to subjective evaluation. A scene-based paradigm for the description and assessment of spatial quality is described, which enables clear distinctions to be made between elements of a reproduced sound scene and will assist in the search for related physical parameters.

Artificial reverberator algorithms, which are implemented using digital signal processing, can be best understood by considering their relationships to several disciplines: the perceptual metrics of the auditory system, the statistical properties of the acoustic spaces, the artistic needs of the music culture, and the mixing techniques in the recording studio. Both the early reverberations, containing the unique spatial personality, and the late part, containing the statistically random process, play different roles in each of the related disciplines. When the temporal and spectral statistics match the perceptual criteria, the process is transparent. Some of the apparent paradoxes are resolved by considering psychoacoustic and statistical models. Moreover, there is sufficient knowledge to predict the performance of an algorithm without extensive ad hoc listening tests. The unifying theme is the question of how the human auditory system builds a sense of space.

Learn more about Alex U. Case

Join the discussion about this collection! (5 comments)