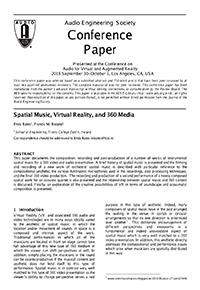 The following paper documents the composition, recording, and post-production of a number of works of instrumental spatial music for a 360 video and audio presentation. The filming and recording of an orchestral work of spatial music is described with particular reference to the various ambisonic microphones used in the recordings, post production techniques, and the delivery of 360 video with matching 360 audio. The recording and production of a second performance of a newly composed spatial work for an acoustic quartet is also presented and the relationship between spatial music and 360 content is discussed. Finally, an exploration of the creative possibilities of VR in terms of soundscape and acousmatic composition is presented.