Evaluation and Improvement of the Mood Conductor Interactive System 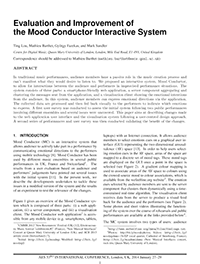 In traditional music performances, audience members have a passive role in the music creation process and can't manifest what they would desire to listen to. We proposed an interactive system, Mood Conductor, to allow for interactions between the audience and performers in improvised performance situations. The system consists of three parts: a smartphone-friendly web application, a server component aggregating and clustering the messages sent from the application, and a visualisation client showing the emotional intentions from the audience. In this system, audience members can express emotional directions via the application. The collected data are processed and then fed back visually to the performers to indicate which emotions to express. A first user survey was conducted to assess the initial system following two public performances involving different ensembles and several issues were uncovered. This paper aims at describing changes made to the web application user interface and the visualisation system following a user-centred design approach. A second series of performances and user survey was then conducted validating the benefit of the changes.