The QRD Diffractal: A New One- or Two-Dimensional Fractal Sound Diffusor 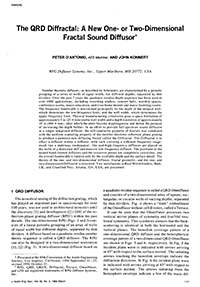 Number theoretic diffusors, as described by Schroeder, are characterized by a periodic grouping of a series of wells of equal width, but different depths, separated by thin dividers. Over the past 7 years the quadratic residue depth sequence has been used in over 1000 applications, including recording studios, concert halls, worship spaces, conference rooms, music education, and even home theater and music listening rooms. The frequency bandwidth is determined principally by the depth of the deepest well, which determines the low-frequency limit, and the well width, which determines the upper frequency limit. Physical manufacturing constraints pose a space limitation of approximately 1 in (25.4 mm) on the well width and a depth limitation of approximately 16 in (406.4 mm), after which the units become diaphragmetic and defeat the purpose of increasing the depth further. In an effort to provide full-spectrum sound diffusion in a single integrated diffusor, the self-similarity property of fractals was combined with the uniform scattering property of the number theoretic reflection phase grating to produce a patented new diffusing fractal called the Diffractal. The Diffractal is in effect a diffusor within a diffusor, with each covering a different frequency range, much like a multiway loudspeaker. The mid-high-frequency diffusors are placed on the wells of a dedicated stiff and massive low-frequency diffusor.Thepassband of the nested band-limited diffusors and the crossover points are completely calculable, and the overall bandwidth is limited only by the available depth and the surface detail. The theory of the one- and two-dimensional diffusor, fractal geometry, and the one- and two-dimensional Diffractal is reviewed. Two installations at Real World Studios, Bath, UK, and Crawford Post, Atlanta, GA, USA, are presented.