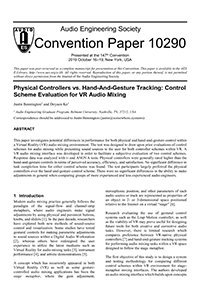 This paper investigates potential differences in performance for both physical and hand-and-gesture control within a Virtual Reality (VR) audio mixing environment. The test was designed to draw upon prior evaluations of control schemes for audio mixing while presenting sound sources to the user for both controller schemes within VR. A VR audio mixing interface was developed in order to facilitate a subjective evaluation of two control schemes. Response data was analyzed with t- and ANOVA tests. Physical controllers were generally rated higher than the hand-and-gesture controls in terms of perceived accuracy, efficiency, and satisfaction. No significant difference in task completion time for either control scheme was found. The test participants largely preferred the physical controllers over the hand-and-gesture control scheme. There were no significant differences in the ability to make adjustments in general when comparing groups of more experienced and less experienced audio engineers.