Influence of Visual Stimuli on Perceptual Attributes of Spatial Audio 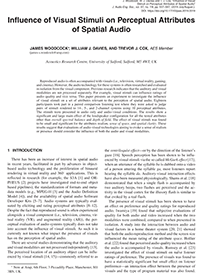 Although audio is often reproduced with a visual counterpart, the audio technology for these systems is often researched and evaluated in isolation from the visual component. Previous research indicates that the auditory and visual modalities are not processed separately by the brain. For example, visual stimuli can influence ratings of audio quality and vice versa. This paper presents an experiment to investigate the influence of visual stimuli on a set of attributes relevant to the perception of spatial audio. Eighteen participants took part in a paired comparison listening test where they were asked to judge pairs of stimuli rendered with fourteen-, five-, and two-channel systems using ten perceptual attributes. The stimuli were presented in both audio only and audiovisual conditions. The results show a significant and large effect of the loudspeaker configuration for all the tested attributes other than overall spectral balance and depth of field. The effect of visual stimuli was found to be small and significant for the attributes realism, sense of space, and spatial clarity. These results suggest that evaluations of audiovisual technologies that are aimed to evoke a sense of realism or presence should consider the influence of both the audio and visual modalities.