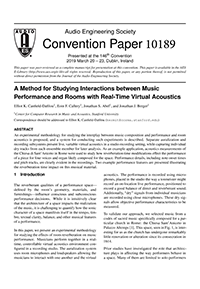 An experimental methodology for studying the interplay between music composition and performance and room acoustics is proposed, and a system for conducting such experiments is described. Separate auralization and recording subsystems present live, variable virtual acoustics in a studio recording setting, while capturing individual dry tracks from each ensemble member for later analysis. As an example application, acoustics measurements of the Chiesa di Sant’Aniceto in Rome were used to study how reverberation time modifications effect the performance of a piece for four voices and organ likely composed for the space. Performance details, including note onset times and pitch tracks, are clearly evident in the recordings. Two example performance features are presented illustrating the reverberation time impact on this musical material.