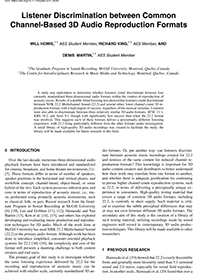 Over the last decade, numerous three-dimensional audio playback formats have been introduced and standardized for cinema, broadcast, and home theater environments. They differ in terms of number of speakers, speaker positions in the horizontal and vertical planes, and workflow strategies: channel-based, object-based, or some hybrid of the two. Each system possesses inherent pros and cons. This research attempts to determine whether listeners could discriminate among four currently standardized three-dimensional audio formats for reproduction of acoustic music. Double-blind listening tests showed that listeners could discriminate between NHK 22.2 Multichannel Sound (22.2) and several lower-channel-count 3D reproduction formats with a high degree of success, regardless of the musical stimulus. Listeners were also able to discriminate between three relatively similar 3D audio formats: ATSC 11.1, KBS 10.2, and Auro 9.1, although with significantly less success than with the 22.2. This suggests each of these formats deliver a perceptually different listening experience, with 22.2 being particularly different from the other formats under investigation.