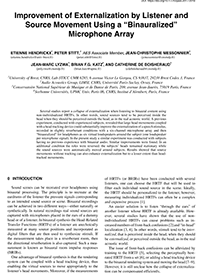 Several studies have reported a collapse of externalization (source location is perceived as being inside the head) when listening to binaural content with nonindividualized HRTFs. A previous experiment conducted with experienced subjects revealed that large head movements coupled with a head-tracking device could substantially improve the externalization of a speech stimulus. In the present study, a similar experiment was conducted with subjects having no previous experience with binaural audio. Similar improvements were found. In an additional condition, the roles were reversed: the subjects’ heads remained stationary while the sound sources were automatically moved around subjects. Results showed that source movements without tracking can also enhance externalization, but to a lesser extent than head-tracked movements. The speech stimulus was a male voice recorded in slightly reverberant conditions with a six-channel microphone array and then “binauralized” over headphones by simulating six virtual loudspeakers around the subject using several nonindividualized HRTFs. It was presented with two different orientations: 0° and 180°