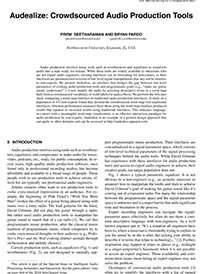 While professional audio development tools such as reverberators and equalizers are widely available to musicians who are not expert audio engineers, their interfaces can be frustrating. Professional interfaces are parameterized in terms of low-level signal manipulations, which are not intuitive to nonexperts. This report describes Audealize as an interface that bridges the gap between low-level parameters of existing audio production tools and programmatic goals, such as “make my guitar sound underwater.” Users modify the audio by selecting descriptive terms in a word-map built from a crowdsourced vocabulary of word labels for audio effects. A study with a population of 432 nonexperts found that they favored the crowdsourced word-map over traditional interfaces. Absolute performance measures showed that those who used the word-map interface produced results that were equal to or better than traditional interfaces. Also, participants preferred the word-map interface on the word matching task. The effectiveness of the interface was surprising because the interface was not designed for this task. One would expect the fine control afforded by the signal-parameter interface would let the user match the effect more closely than would be likely with the word-map. This indicates that a crowdsourced language is an effective interaction paradigm for novice users of audio production tools.

Start a discussion about this report!