The Influence of Perceptual Attack Times in Networked Music Performance 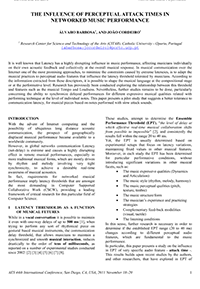 It is well known that Latency has a highly disrupting influence in music performance, affecting musicians individually on their own acoustic feedback and collectively at the overall musical response. In musical communication over the Internet one of the most promising approaches, to minimize the constraints caused by extreme latencies, is to adapt the musical practices to perceptual audio features that influence the latency threshold tolerated by musicians. According to the information extracted from these descriptors, it is possible to shape the musical language at the compositional stage or at the performative level. Research has previously been conducted exploring the relationship between this threshold and features such as the musical Tempo and Loudness. Nevertheless, further studies remains to be done, particularly concerning the ability to synchronize delayed performances for different expressive musical qualities related with performing technique at the level of individual notes. This paper presents a pilot study that suggests a better tolerance to communication latency, for musical pieces based on notes performed with slow attack sounds.