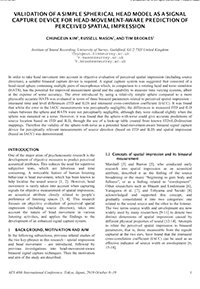 In order to take head movement into account in objective evaluation of perceived spatial impression (including source direction), a suitable binaural capture device is required. A signal capture system was suggested that consisted of a head-sized sphere containing multiple pairs of microphones which, in comparison to a rotating head and torso simulator (HATS), has the potential for improved measurement speed and the capability to measure time varying systems, albeit at the expense of some accuracy. The error introduced by using a relatively simple sphere compared to a more physically accurate HATS was evaluated in terms of three binaural parameters related to perceived spatial impression – interaural time and level differences (ITD and ILD) and interaural cross-correlation coefficient (IACC). It was found that whilst the error in the IACC measurements was perceptually negligible, the differences in measured ITD and ILD values between the sphere and HATS were not perceptually negligible, although they were reduced slightly when the sphere was mounted on a torso. However, it was found that the sphere-with-torso could give accurate predictions of source location based on ITD and ILD, through the use of a look-up table created from known ITD-ILD-direction mappings. Therefore the validity of the sphere-with-torso as a potential head-movement-aware binaural signal capture device for perceptually relevant measurements of source direction (based on ITD and ILD) and spatial impression (based on IACC) was demonstrated.