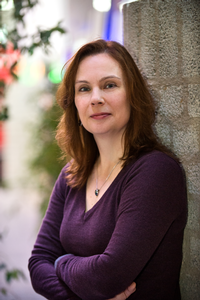 Darcy began her career at Sony Music Studios in New York City in the Classical Department, later focusing her skills on mastering and broadening her musical scope to include all genres from historical reissues to cutting-edge surround releases. In 2005, she moved to Europe serving as Senior Mastering Engineer at Galaxy Studios in Belgium for several years before moving on to Wisseloord Studios in the Netherlands where she currently bases her mastering business.
Over the years, Darcy has been honored with 3 Grammy awards and 9 nominations and has won several other awards for her work.

She has had the pleasure of mastering historical reissue projects for such prestigious artists as Billie Holiday, Louis Armstrong, Frank Sinatra, Tony Bennett, and Johnny Cash. She has also worked on stereo and 5.1 front-line releases for many talented artists including Steely Dan, The Eagles, Ozark Henry, Donald Fagen, Porcupine Tree, Peter Maffay, Patricia Barber, Mando Diao, The Common Linnets and Marcus Miller.