Nashville, Tennessee, January 25, 2009 - Following on the success of the first annual Nashville Recording Workshop + Expo in 2009, The AES Nashville Section, in conjunction with Belmont University’s Mike Curb College of Entertainment and Music Business, is pleased to announce the dates for this year’s session to be held at Belmont’s Curb Event Center, just steps away from the heart of Nashville’s legendary Music Row. This two-day conference and trade show exposition will be held on March 5-6, 2010, and will once again feature top industry guest speakers and panelists, as well as exhibits by many of today’s leading audio gear manufacturers. Last year, over 300 attendees from 28 states and 5 different countries participated in this unique industry event which focuses on recording musicians and engineers working in wide variety of personal production spaces and studio environments. Students from some 20 audio technology schools were also part of that number.

“We are very pleased to announce this upcoming event, building on last year’s success, and the ability to hold it at such an esteemed venue,” stated Mike Porter, Chair, AES Nashville Section, “The Curb Event Center at Belmont holds many of Nashville’s high-profile events and conferences, and we a proud to partner with them as the annual NRW+E event grows to encompass all aspects of what the Audio Engineering Society, as well as the Nashville recording community, have come to represent.” 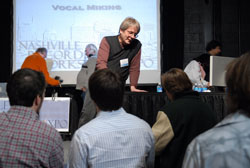 The Nashville Recording Workshop + Expo was designed to provide the growing number individuals owning personal recording spaces, including artists and songwriters, access to the experience and knowledge of the AES and its affiliates, and to provide real-world insights into technology and techniques that can help attendees achieve professional results, whether in a high-end recording studio or working with a less-than-professional budget. Last year’s presenters included an immense presentation of Nashville talent, from keynote address speaker Ricky Skaggs, to the dozens of leading industry professionals representing all genres of music, including: Rich Adler, Jeff Balding, Lynn Fuston, George Massenburg, Vance Powell, Michael Wagener and many more. Additional guest presenters included NY-based mastering engineer Alan Silverman and CA-based engineers Tony Shepperd and Jeff Markham. Sessions included topics such as Capturing Acoustic Instruments, Recording Vocals, The ABC’s of Mics and Preamps—a full slate of focused content with an emphasis on live demonstration. Names of this year’s presenters will soon be announced, with an equally impressive line-up of topics and talent.

“The Nashville Section 2009 event was a great success on all levels, and we look forward to an equally enthusiastic response from both attendees and exhibitors this year,” remarked AES Executive Director Roger Furness.

Beyond workshops, attendees could also browse the offerings of the sold-out ‘Expo’ portion of the conference, with gear, products and services demonstrated by over 50 hardware and software manufacturers and vendors (many offering special NRW+E discounts on their products), as well as professional organizations representing songwriters, musicians and engineers.