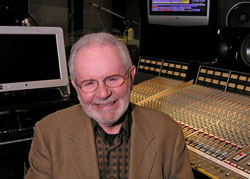 New York, NY - The 25th Annual Technical Excellence & Creativity Awards has announced the presenters, sponsors and schedule of the show, to be held on Saturday, October 10 at the Audio Engineering Society Convention in New York. The festivities will begin at 5:00 p.m. with a cocktail reception outside the South Concourse Special Events Room followed by the awards ceremony at 6:00. A limited number of tickets remain available and may be purchased at http://www.mixfoundation.org/tec/tecawards.html

"We are grateful beyond words for the participation of so many key figures in our industry's history," said Hillel Resner, president of the Mix Foundation for Excellence in Audio, presenter of the awards. "This year in particular, with the economic pressures everyone is facing, the value of the moral support of these old friends, as well as the material support of the AES in hosting the event, cannot be overstated."

Resner also pointed to the generous support of the sponsors as indispensable. Besides presenting sponsors Gibson and the nonprofit Gibson Foundation, GG Pro and AES, other Front House Sponsors include Broadjam, Inc., which contributed IT assistance for the TEC Awards voting, RODE/Event, Shure, Inc. and Sterling Audio. Legacy Sponsors include G.A.N.G., Meyer Sound, the Producers/Engineers Wing of the Recording Academy and Universal Audio. Fifteen Supporting Sponsors complete the sponsorship lineup. All sponsors and links to their websites, as well as TEC Awards ticket and event information, can be found at www.mixfoundation.org. The Mix Foundation for Excellence in Audio is a 501(c)(3) charitable organization headquartered in Walnut Creek, California. The Foundation's primary mission is to further understanding of and excellence in professional audio through educational programs, including the TEC Awards and the TECnology Hall of Fame, as well as scholarships for students of the audio arts and sciences. The Foundation has also been a leader in promoting hearing health in the music environment by supporting programs of the House Ear Institute and H.E.A.R.