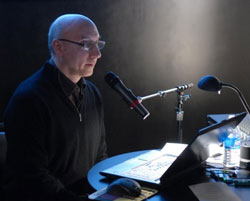 NEW YORK:  In an atmosphere charged with high-level presentations by high-level industry professionals, the 127th AES Convention Master Class Program raises the bar once again with stand-out colloquiums by a gathering of iconic figures. “Master Class Chair Alan Silverman has never failed to develop a must-see program, and this year he has outdone himself,” reports Convention Chair Agnieszka Roginska.  “We expect the credentials of the presenters coupled with the diversity of their subject matter will attract standing room only audiences.”

Platinum Mixing In The Box: Kevin Killen - A legendary background in the analog domain capped by a successful transition to the digital environment has established Killen’s reputation as a world-class mixer (U2, Peter Gabriel, Sugarland). Addressing the potential for mixing a million selling record in a bedroom, Killen will share insights into his techniques.  The discussion will explore how technology, budgets and experience have shaped his approach to the perpetually evolving challenges of the marketplace.

Mastering The Motown Sound: Presenters Bob Dennis and Bob Olhsson mastered records that helped revolutionize popular music. In conjunction with Motown’s 50th Anniversary, this Master Class will illustrate how these engineers cut the loudest and cleanest records of the early ‘60’s, and established a new standard for sound quality with “Where Did Our Love Go,” the Supremes first #1 hit. Their simple psychoacoustic principle for level manipulation in both mixing and mastering effectively raised perceived loudness. And, they got the job done primarily without the use of compression and limiting. In addition to describing their techniques, Dennis and Olhsson will show how the Motown approach can be applied to mastering today.

Wrangling The Room: Bob Hodas -  Renowned acoustician and studio musician Bob Hodas has tuned over a thousand rooms from Tokyo for Sony Entertainment, to London for Abby Road, and Stateside for Lucasfilms.  This master class will focus on the speaker/room interface and optimizing system performance.  The frequency and phase response of proper (and improper) speaker placement will be detailed.  Integrating subwoofers with the main speaker system for both stereo and surround systems will be covered, as will be equalization and pointers on determining and implementing optimal acoustic treatments.

The Design Of High-Performance Balanced Audio Interfaces:  Bill Whitlock, President, Jensen Transformers Inc.  For 50 years, virtually all audio equipment used transformers at its balanced inputs and outputs. Their high noise rejection was taken for granted and its cause all but forgotten. The transformer’s extremely high common-mode impedance - about a thousand times that of its solid-state “equivalents” - is the reason. Traditional input stages will be discussed and compared. A novel IC that compares favorably to the best transformers will be described. Widespread misunderstanding of the definition of “balanced” in its underlying theory has resulted in many design errors in modern equipment and in seriously flawed testing methods. This Master Class will cover these and other important issues.

Audiography – Writing With Sound: Dirk Brauner has designed some of the world’s finest microphones.  If Photography may be defined as writing with light, than Audiography is writing with sound. Engaging audio and visual illustrations, this Master Class will present Mr. Brauner’s philosophy of recording as sonic artistry rather than a purely technical science. He will explore how microphones represent the first critical step in capturing those elusive moments that define the ‘classic’ performance.

Analog Circuit Emulation for Plug-in Design:  Dr. David Berners and Jonathan Abel, of the Center for Computer Research in Music and Acoustics and Universal Audio, are two of the foremost experts in digital modeling and the software emulation of classic analog audio circuitry.  They will share insights, approaches, and techniques engaged in their creation of some of the production community’s most widely used analog emulation algorithms.

Alan Silverman is principal and mastering engineer at Arf! Mastering, a NYC facility specializing in high-resolution audio. His discography lists numerous Grammy Award CDs including the world music phenomenon "Lagrimas Negras," nominated for Record of The Year, Album of The Year, and Best Engineered Record in the 2004 Latin Grammies and voted the top CD of 2003 by Ben Ratliff of the New York Times. He recently completed re-mastering The Kinks catalog for hybrid SA-CD.