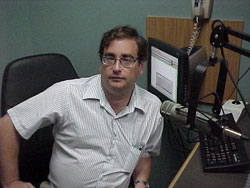 NEW YORK: Returning for his 21st consecutive year as AES Convention Broadcast & Streaming Sessions Chair, David Bialik continues his quest for ground-breaking programming concepts. Sessions on Audio Processing for Internet Streaming Innovations in Digital Broadcasting and Signal Management for Digital TV will be augmented by an assemblage of events also covering such enduring issues as Listener Fatigue, Lip Sync and Loudness. In another departure from tradition, the popular Considerations for Facility Design panel will convene as a two-hour Facility Design: A Case Study. In keeping with the increased attention to the Broadcast Community, the AES has named Peabody Award-winning radio host William “Bill” McGlaughlin keynote speaker for the 127th Convention.

Audio For Newsgathering: Working representatives from this elite, unique and occasionally dangerous branch of the audio world are encountering a constantly expanding universe of options for gathering and broadcasting news: From EV-DO to BGAN, AMR-WB to HE-AAC, CF to SDHC, this session will move beyond the acronyms to investigate current and emerging options for audio field recording and “backhaul.” The panel TBA, will be chaired by respected industry journalist Skip Pizzi.

“David Bialik has distinguished AES Conventions with a constantly evolving progression of panels that has drawn industry-wide recognition,” remarked AES Executive Director Roger Furness. “His encyclopedic knowledge of his field coupled with his close working relationships with key players in virtually every aspect of this radically shifting field are considered a mainstay of our convention.”

A comprehensive Calendar of Events will be posted at http://www.aes.org/events/127/ soon. The 127th AES Convention will be held in NYC’s Javits Convention Center Oct. 9-12, 2009.