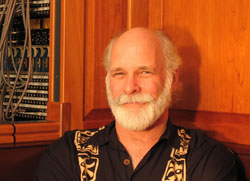 NEW YORK:   AES Executive Director Roger Furness has announced the completion of the second volume of Audio Engineering Society DVD Oral History Project interviews.  Conceived in 1997 by long-time AES member Irv Joel, the project was initiated as a critical opportunity for preserving the creative and technical thought process of the originators of professional audio as related by them personally.

“Irv Joel has maintained close, on-going relationships with many of the giants of our industry,” Furness said.  “In addition to coordinating the interviews, he personally served as cameraman and off-camera interviewer for most of them.  The entire professional audio community owes Irv Joel a vote of thanks for producing over 100 irreplaceable one-on-one interviews.”

In 2007, Joel brought Pro Audio Industry veteran Harry Hirsch on board to glean through a voluminous amount of video, photographic and related material, carefully organized by Technical Director John Chester in preparation for the transfer to individual DVDs.  Working with Final Cut Pro, Hirsch, devoted hundreds of hours to the massive editorial project.

Among the innovators featured in the new set of twenty DVDs are:

Bruce Martin: (1944-2004) Founder, Martin Audio, one of the industry’s largest dealerships in the 1970s and‘80s, he was an innovative console designer, and inventor of the Martin Vari-Speed, used by many studios to alter tape machine speed.

Bill Hanley: The "father of festival sound,” best known for designing, building, installing, and operating a custom sound system for the historic 1969 Woodstock Music and Arts Fair. Mr. Hanley is a storied FOH mixer and a co-founder the Fillmore East.

Ed Greene:  Chief engineer at MGM Records in 1970s; world-renowned engineer; mixer for Grammy and Academy Awards and the Salt Lake City Winter Olympics broadcasts; recipient of nineteen Primetime Emmy Awards and inducted into the Technical Excellence in Creativity Hall of Fame in 2007.

Dr. Floyd E. Toole: Recipient of the 2008 CEDIA Lifetime Achievement Award, Dr. Toole is a 40-year pioneer in the acoustics field, widely known for his research on small room acoustics, relating measurements to a listener's perceptions. A contributor to many audio publications, he continued his groundbreaking work as VP of Acoustical Engineering at Harmon International Industries, Inc. until his retirement.

Dr. Marina Bosi: An AES past president AES, Dr. Bosi is Consulting Professor in the Music and Electrical Engineering Departments at Stanford University, and a founding member/director of the Digital Media Project. An accomplished author, she holds several patents and received the AES Fellowship Award for her work on audio standards development.

Ioan Allen: Since joining Dolby Laboratories in 1969, Allen spearheaded the introduction of many breakthrough film sound technologies. He received an Oscar for his contributions to motion picture sound development, holds several patents and has authored many AES Journal papers. He is active in world standards organizations, and is Adjunct Professor at the USC School of Cinema-Television.

John Meyer:  Influencing the way audiences hear sound since the late 60s, Meyer began creating loudspeakers using integral control processors at SF-based McCune Sound Service. Since founding Meyer Sound Laboratories in 1979, his innovations such as advanced self-powered loudspeaker systems have changed the face of live sound. Meyer Sound has garnered 37 U.S. and international patents and numerous industry awards. He was made an AES Fellow in 1985, and he received the Silver Medal in 2007.

“Irv Joel, Harry Hirsch and John Chester are making an invaluable contribution to the appreciation and understanding of our industry’s early prime-movers,” comments AES Historical Committee co-chair Bill Wray. “We are fortunate to have a library of over sixty additional videotaped interviews, all of which are planned for DVD release. And,” Wray adds, “we plan to continue producing an on-going series of interviews with current and future visionaries.”

“This AES Oral History Project was initiated as an inspiration to new generations of audio industry professionals,” Roger Furness concludes.  “Education remains an AES priority, and these unique DVD personal histories represent a priceless link between our past and our rapidly evolving future. Many of the leading pro audio schools both in the United States and abroad have already added our initial twenty productions to their libraries. We look forward to a steadily growing subscription list as meaningful new titles are added to this collection.”

The entire (current) series of forty compelling AES Oral History Project DVDs is available now at www.aes.org  $15.00 each for AES members, $20.00 for non-members.

Now celebrating its 60th anniversary, the Audio Engineering Society was formed in 1948 by a group of concerned audio engineers. With over 14,000 members throughout the U.S., Latin America, Europe, Japan and the Far East, the AES serves as the pivotal force in the exchange and dissemination  of  technical information for the industry.  For additional information visit http://www.aes.org