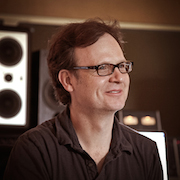 INTERPOL – THE NATIONAL – FRIGHTENED RABBIT – THE SWELL SEASON –  JÓNSI
Peter Katis is well known for his engineering, mixing, and producing alternative and indie rock acts, such as The National, Interpol, Frightened Rabbit, Jónsi Birgisson (of Sigur Rós), Local Natives, Augustines, The Head and the Heart, Trey Anastasio, The Swell Season, Mercury Rev, The Twilight Sad, We Were Promised Jetpacks, Shearwater, Mates Of State, Tokyo Police Club, The Kissaway Trail and many more. Katis’ credits page at Allmusic.com listed more than 360 entries over a 20-year long career, indicating that Katis is extremely popularity and talent.
He works from his own residential studio, Tarquin Studios, in Bridgeport, Connecticut, which he originally set up with his brother. The studio’s homey feel, with a huge control room and large recording areas, plus an extensive collection of analogue gear and instruments, all remain crucial to his way of working. The analogue gear at Tarquin includes Studer 961 and 962 consoles, Studer A827 24-track and A820 1/2? 2-track tape machines, and outboard by the likes of API, Neve, Telefunken, Neumann, Chandler, Thermionic Culture, Universal Audio, Teletronix, Urei, and much more. But, like almost everyone today, Katis also makes extensive use of digital equipment.
In the course of his twenty years of writing, playing, engineering, mixing and producing music Katis has influenced many producers, engineers, mixers and musicians that work in the alternative and indie rock music and continues to make waves in these worlds.