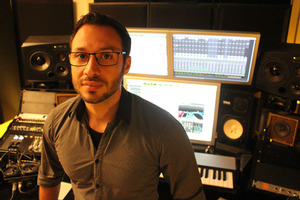 AUDIO EDUCATOR:
I am a senior lecturer at SAE Brisbane. Over the past decade, I have taught at various educational levels including secondary, tertiary, VET, community-based settings, and at industry events such as Sydney’s Electronic Music Conference.
As a passionate educator, I wrote “Audio Production Principles: Practical Studio Applications” (textbook published in 2018 by Oxford University Press), hoping that my years of tireless learning through practice could help guide other engineers. The book covers topics such as basic control room acoustics, pre-production processes, sound recording processes (specifically aimed at popular music instruments), mixing, and mastering.

SOUND ENGINEER:
Through the running of my electronic music mastering studio (se.audio), I have worked with 100+ of labels and artists around the globe. Most notably, I have worked with labels such as Hot Creations, Pacha Recordings, Hussle Recordings, One Love, Central Station Records, Safari Music; and artists such as TJR, Deorro, Joel Fletcher, Freemasons, Motez, Bombs Away, Denzal Park, Mobin Master, and many more. Full credit list can be found on my website (se.audio).

COMPOSER/PRODUCER:
As a composer/producer, I have honed my skills by composing folk and soft rock songs between 2003-2009 before moving into electronic music from 2010 onwards. I have gained industry recognition by releasing music on such compilations as Godskitchen, labels including Hussle Recordings and Central Station Records, reaching #1 sales on various online music retailers, numerous inclusions on the ARIA club chart, writing music for Film/TV such as Netflix's Lunatics, writing jingles for companies such as EB Games, producing sample packs for Primeloops, and being featured in Audio Technology magazine. Most music releases have been done under the names Jotheo, Nino Live, and Stark Lion.

PERFORMING MUSICIAN:
I have been involved in the Australian music industry since the early 2000s. In that time, I have performed 1000+ shows at 100+ venues as a DJ & percussionist, including some of the largest music festivals the country has on offer (Stereosonic, Summafieldayze, Future Music Festival, and Creamfields for example). At an international level, I regularly perform in Ibiza (e.g. Pacha, Zoo Project), and have played in other parts of the world such as Morocco, France, and New-Caledonia.