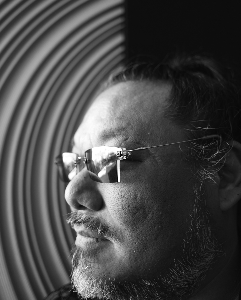 Hanson Hsu was raised in a quiet suburb of Syracuse, New York. The grandson of a symphony orchestra conductor, and son of a scientist, he was drawn to music, theatre, and film at a young age. Inherently artistic and curious, he learned sound and lighting for theatre in school productions and community theatre. Hsu self-authored his bachelor’s degree through a unique program known as the Innovative Projects Board at the State University of New York at Binghamton. His thesis, “Creative Sound Technology”, was based in 5 fields of study: Music, Theatre, Film, Psychology and Physics.
At the University’s Roadhouse Theatre, he worked in live sound with a wide variety of artists including: Pearl Bailey, Wynton Marsalis, Rudolf Nuryev, Bradford Marsalis, ABT, Gordon Lightfoot, Sankai Juko, Alvin Ailey American Dance Theatre, Peter Paul and Mary, Hubbard Street Dance Theatre and the Royal Winnipeg Ballet.

Hsu founded DHDI in 1997, a design firm specializing in acoustics and architecture with an emphasis on research and innovation. In 2006, Hsu invented the ZR Acoustics® design paradigm, motivated by the late, great Mike Shipley’s request for a new studio design “…with world class acoustics, filled with light and windows in a rectangular room without angling any walls or the ceiling.”