I’m mostly a live sound and recording guy, and that is my primary area of interest in the E-Library. I come at audio from the technical/electronics direction rather than from being a musician, so my choices may be more theoretical and less practical. Still, I’m always up for a good recipe.

This collection lists papers that, at first glance, seemed of interest for further reading. I have read some of them previously; this gave me a foundation upon which to base my search on, which in the end was only a few names, and the rest fell out of the tree as I shook it.

Those names are:
Chris Strahm, of Northwest Sound and Maryland Sound Industries, who did some fundamental reasearch into multi-driver and multi-cabinet bass arrays. Chris also wrote the LEAP loudspeaker analysis program.
Milton Putnam, of United Recording Industries, and later UREI.
John Eargle, who was a prolific author on a number of topics, including recording and loudspeakers.
John Windt, who invented the Hummer device for finding pin-1 problems.
Neil Muncy, who identified the Pin-1 problem.
Jim Brown, who did research into microphone splitters, RFI into microphones, and other aspects of the Pin-1 problem.
Cal Perkins, inventor of the JBL 4550 and 4560 bass bins, who also contributed to the pin-1 problem research.
Michael Rettinger, an acoustician who had a hand in the acoustic design many of the early recording studios. 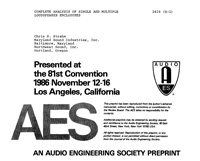 An improved model for the design and analysis of loudspeaker enclosures will be described which includes the mutual impedance terms between multiple ports, speakers, and enclosures. In addition, a powerful computer simulation program will be presented utilizing the developed acoustical model for the analysis of several sample enclosures and arrays. Actual measurements of the sample enclosures will be shown and compared to the simulations of the modeling program. 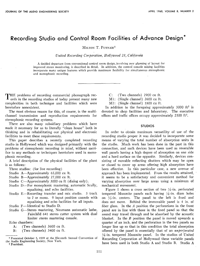 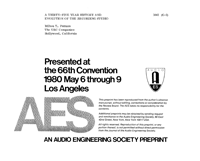 An historic review of the three and one half decades from the mid forties to 1980, provide a most interesting period of development of the recording studio, control room, and reverberation rooms and devices. Some basic fundamental techniques have weathered the test of time. The evolving changes in design concept occurred as a a result of the drastic shift in the music idiom, the major improvements in recording technology, and the need for cosmetic and esthetic alteration to accommodate the performers' wishes. 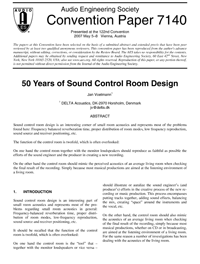 Sound control room design is an interesting corner of small room acoustics and represents most of the problems found here: Frequency balanced reverberation time, proper distribution of room modes, low frequency reproduction, sound source and receiver positioning, etc. The function of the control room is twofold, which is often overlooked: On one hand the control room together with the monitor loudspeakers should reproduce as faithful as possible the efforts of the sound engineer and the producer in creating a new recording. On the other hand the control room should mimic the perceived acoustics of an average living room when checking the final result of the recording. Simply because most musical productions are aimed at the listening environment of a living room. 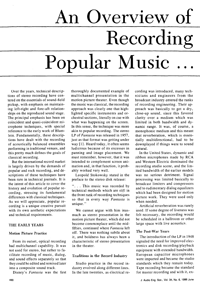 Over the years, technical descriptions of stereo recording have centered on the essentials of sound-field pickup, with emphasis on maintaining left-right and fore-aft relationships on the reproduced sound stage. The principal emphasis has been on coincident and quasi-coincident microphone techniques, with special reference to the early work of Blumlein. Fundamentally, these descriptions have dealt with the recording of acoustically balanced ensembles performing in traditional venues, and this pretty much defines the goals of classical recording. 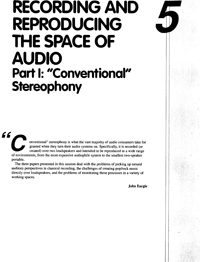 "Conventional" stereophony is what the vast majority of audio consumers take for granted when they turn their audio systems on. Specifically, it is recorded (or created) over two loudspeakers and intended to be reproduced in a wide range of environments, from the most expensive audiophile system to the smallest two-speaker portable. The three papers presented in this session deal with the problems of picking up natural auditory perspectives in classical recording, the challenges of creating pop/rock music directly over loudspeakers, and the problems of monitoring these processes in a variety of working spaces. 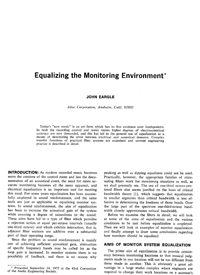 Today's -new music- is an art form which has its first existence over loudspeakers. In both the recording control and remix rooms higher degrees of electroacoustical accuracy are now demanded, and this has led to the general use of equalization as a means of minimizing the error between electrical and acoustical domains. Complex transfer functions of practical filter systems are examined and current engineering practice is described in detail. 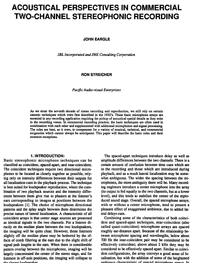 As we enter the seventh decade of stereo recording and reproduction, we still rely on certain canonic techniques which were first described in the 1930's. These basic microphone arrays are essential in any recording application requiring the pickup of acoustical spatial details as they exist in the recording venue. In commercial recording practice, the basic techniques are often used in combination with each other and supplemented with additional microphones and signal processing. The rules are bent, as it were, to compensate for a variety of musical, technical, and commercial exigencies which cannot always be anticipated. This paper will describe the basic rules and their common exceptions.

[feature] Horns and direct-radiating systems have provided the basis for sound reinforcement for more than a century. Both technologies have benefited from engineering and manufacturing improvements as well as demands for pushing the performance envelope. Trends of fashion have often intersected with engineering development, economics, and even marketplace opportunism. A survey tutorial of the significant developments in transduction, signal transmission, and system synthesis is presented here and discussed in historical perspective. 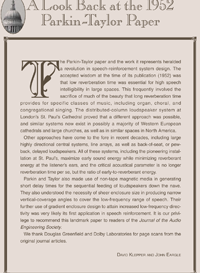 [Feature Article] The Parkin-Taylor paper and the work it represents heralded a revolution in speech-reinforcement system design. The accepted wisdom at the time of its publication (1952) was that low reverberation time was essential for high speech intelligibility in large spaces. This frequently involved the sacrifice of much of the beauty that long reverberation time provides for specific classes of music, including organ, choral, and congregational singing. The distributed-column loudspeaker system at London’s St. Paul’s Cathedral proved that a different approach was possible, and similar systems now exist in possibly a majority of Western European cathedrals and large churches, as well as in similar spaces in North America. 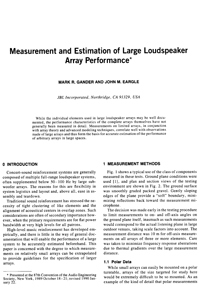 While the individual elements used in large loudspeaker arrays may be well documented, the performance characteristics of the complete arrays themselves have not generally been measured in detail. Measurements on limited arrays, in conjunction with array theory and advanced modeling techniques, correlate well with observations made of large arrays and thus form the basis for accurate estimation of the performance of arbitrary arrays in large spaces.

Recording Techniques as a Measure of the Quality of Concert Hall Acoustics
Paper 1504; AES Convention 63; May 1979
Potter, Constance A.; Hoge, W. J. J.

A Bibliography of the Relevant Literature on the Subject of Microphones
JAES Volume 33 Issue 7/8 pp. 557-561; August 1985
Knoppow, Richard