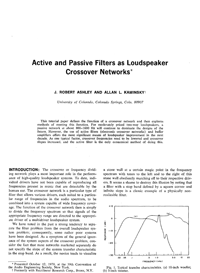 This tutorial paper defines the function of a crossover network and then explores methods of meeting this function. For moderately priced two-way loudspeakers, a passive network at about 800-1600 Hz will continue to dominate the designs of the future. However, the use of active filters (electronic crossover networks) and buffer amplifiers offers the most significant means of loudspeaker improvement in the next decade. As one typical factor, crossover frequencies need to be lowered and crossover slopes increased, and the active filter is the only economical method of doing this. 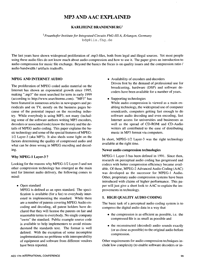 The last few years have shown widespread proliferation of .mp3 files from both legal and illegal sources. Yet most people using these audio files do not know much about audio compression and how to use it. The paper includes an introduction to audio compression for music file exchange. Beyond the basics, the focus is on quality issues and compression ratio/audio bandwidth/artifacts tradeoffs. 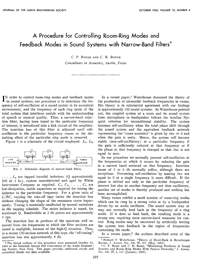 In order to control room-ring modes and feedback modes in sound systems, our procedure is to determine the frequency of self-oscillation of a sound system in its acoustical environment, and the frequency of each ring mode of the total system that interferes unduly with the understanding of speech or musical quality. Then, a narrow-band rejection filter, having been tuned to the particular frequency of interest, is introduced into a link circuit of the amplifier. The insertion loss of this filter is adjusted until self-oscillation in the particular frequency ceases or the disturbing effect of the particular ring mode is removed. 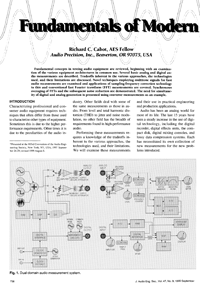 Fundamental concepts in testing audio equipment are reviewed, beginning with an examination of the various equipment architectures in common use. Several basic analog and digital audio measurements are described. Tradeoffs inherent in the various approaches, the technologies used, and their limitations are discussed. Novel techniques employing multitone signals for fast audio measurements are examined and applications of sampling frequency correction technology to this and conventional FFT measurements are covered. Synchronous averaging of FFTs and the subsequent noise reduction are demonstrated. The need for simultaneity of digital and analog generation is presented using converter measurements as an example. 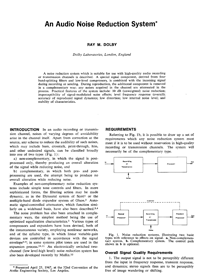 A noise reduction system which is suitable for use with high-quality audio recording or transmission channels is described. A special signal component, derived from four band-splitting filters and low-level compressors, is combined with the incoming signal during recording or sending. During reproduction, the additional component is removed in a complementary way; and noises acquired in the channel are attenuated in the process. Practical features of the system include: 10 dB (unweighted) noise reduction; imperceptibility of signal-modulated noise effects; level frequency response (overall); accuracy of reproduced signal dynamics; low distortion; low internal noise level; and stability of characters. 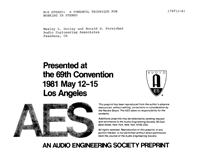 The practical requirements of broadcast and cinema stereo sound dictate the need for good stereo imaging, as well as full monaural compatibility. Coincident miking fulfills this requirements, and the most versatile of these techniques is the M-5 matrixing of a forward facing directional microphone with a laterally oriented bi-directional microphone. The results offer both good stereo perspective and full (discrete) monaural compatibility. The importance and implementation of this technique to the recording, broadcast, and film media will be discussed. 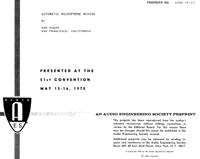 A method of analysis of sound reinforcement problems by means of active and passive speech zones is outlined. The need for automatic control of multi-mike systems is defined, along with the problems associated with the use of voice-operated switches. Adaptive threshold gating is proposed as the best solution to the problem of active microphone detection. The development and performance of two effective automatic control systems is described.

The author demonstrated the first effective automatic microphone mixer in 1974 at the 49th AES Convention in New York. A later system, specialized for speech, has been manufactured since 1976. Other manufacturers developed their own systems, and automatic mike mixers have become common in unattended sound reinforcement systems in the U.S.A. The original patent expires in 1991. The author celebrates this anniversary by explaining how to use it. 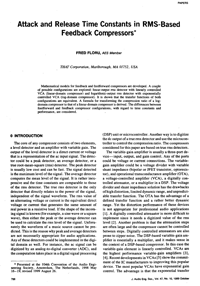 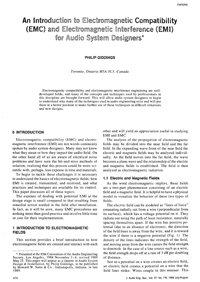 Electromagnetic compatibility and electromagnetic interference engineering are well-developed fields, and many of the concepts and techniques used by professionals in this discipline are brought forward. This will allow audio system designers to begin to understand why many of the techniques used in audio engineering exist and will put them in a better position to make further use of these techniques in difficult situations and new designs. 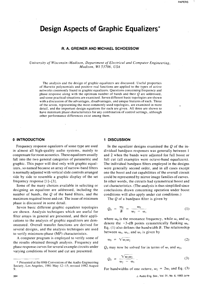 The analysis and the design of graphic equalizers are discussed. Useful properties of Hurwitz polynomials and positive real functions are applied to the types of active networks commonly found in graphic equalizers. Questions converning frequency and phase response along with the optimum number of bands and their Q are addressed, and some practical situations are examined. Seven different basic topologies are shown with a discussion of the advantages, disadvantages, and unique features of each. three of the seven, representing the most commonly used topologies, are examined in more detail, and the important design equations for each are given. All three are shown to have minimum phase characteristics for any combination of control settings, although other performance differences exist among them.