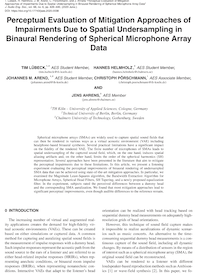 Spherical microphone arrays (SMAs) are widely used to capture spatial sound fields that can then be rendered in various ways as a virtual acoustic environment (VAE) including headphone-based binaural synthesis. Several practical limitations have a significant impact on the fidelity of the rendered VAE. The finite number of microphones of SMAs leads to spatial undersampling of the captured sound field, which, on the one hand, induces spatial aliasing artifacts and, on the other hand, limits the order of the spherical harmonics (SH) representation. Several approaches have been presented in the literature that aim to mitigate the perceptual impairments due to these limitations. In this article, we present a listening experiment evaluat- ing the perceptual improvements of binaural rendering of undersampled SMA data that can be achieved using state-of-the-art mitigation approaches. We examined the Magnitude Least-Squares algorithm, the Bandwidth Extraction Algorithm for Mi- crophone Arrays, Spherical Head Filters, SH Tapering, and a newly proposed equalization filter. In the experiment, subjects rated the perceived differences between a dummy head and the corresponding SMA auralization. We found that most mitiga- tion approaches lead to significant perceptual improvements, even though audible differences to the reference remain.