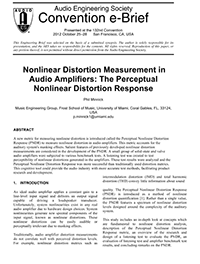 The Engineering Briefs at this Convention were selected on the basis of a submitted synopsis, ensuring that they are of interest to AES members, and are not overly commercial. These briefs have been reproduced from the authors' advance manuscripts, without editing, corrections, or consideration by the Review Board. The AES takes no responsibility for their contents. Paper copies are not available, but any member can freely access these briefs. Members are encouraged to provide comments that enhance their usefulness.