The Effect of Stereo Crosstalk on Intelligibility: Comparison of a Phantom Stereo Image and a Central Loudspeaker Source 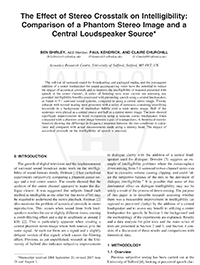 The roll out of surround sound for broadcasting and packaged media, and the consequent addition of a center loudspeaker for sound accompanying video have the potential to reduce the impact of acoustical crosstalk and so improve the intelligibility of material presented with speech in the center channel. A series of listening tests were carried out assessing any potential intelligibility benefits associated with presenting speech using a central loudspeaker, as found in 5.1 surround sound systems, compared to using a central stereo image. Twenty subjects with normal hearing were presented with a series of sentences containing identifying keywords in a background of multitalker babble over a wide stereo image. Half of the sentences were played as a central source and half as a central stereo image. The tests showed significant improvements in word recognition using a separate center loudspeaker when compared with a phantom center image between a pair of loudspeakers. A theoretical transfer function showing the difference in frequency response between the two conditions is calculated and compared with actual measurements made using a dummy head. The impact of acoustical crosstalk on the intelligibility of speech is assessed.