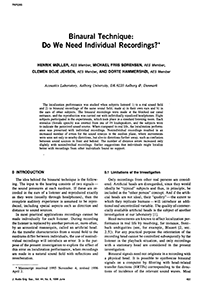 The localization performance was studied when subjects listened 1) to a real sound field and 2) to binaural recordings of the same sound field, made a) in their own ears and b) in the ears of other subjects. The binaural recordings were made at the blocked ear canal entrance, and the reproduction was carried out with individually equalized headphones. Eight subjects participated in the experiments, which took place in a standard listening room. Each stimulus (female speech) was emitted from one of 19 loudspeakers, and the subjects were to indicate the perceived sound source. When compared to real life, the localization performance was preserved with individual recordings. Nonindividual recordings resulted in an increased number of errors for the sound sources in the median plane, where movements were seen not only to nearby directions but also to directions further away, such as confusion between sound sources in front and behind. The number of distance errors increased only slightly with nonindividual recordings. Earlier suggestions that individuals might localize better with recordings fro other individual's found no support.