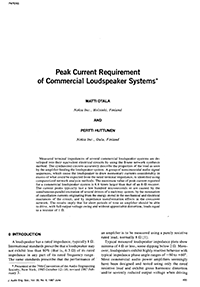 Measured terminal impedances of several commercial loudspeaker systems are developed into their equivalent electrical circuits by using the Brune network synthesis method. The synthesized circuits accurately describe the properties of the loud as seen by the amplifier feeding the loudspeaker system. A group of nonsinusoidal audio signal sequences, which cause the loudspeaker to draw momentary currents considerably in excess of what could be expected from the rated terminal impedance, is identified using computerized network analysis methods. The maximum value of peak cvrrent reported for a commercial loudspeaker is 6.6 times larger than that of an 8-(symbol) resistor. The current peaks typically last a few hundred microseconds or are caused by the simultaneous parallel excitation of several drivers of multiway system, by the summation of cancellation currents originating from the energy stored in the mechanical and electrical reactances of the circuit, and by impedance transformation effects in the crossover network. The results imply that for short periods of time an amplifier should be able to drive, with full output voltage swing and without appreciable distortion, loads equal to a resistor of 1 (symbol).