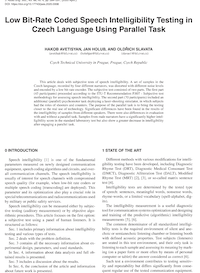 This article deals with subjective tests of speech intelligibility. A set of samples in the Czech language, recorded by four dif- ferent narrators, was distorted with different noise levels and encoded by a low bit-rate encoder. The subjective test consisted of two parts. The first part (45 participants) proceeded according to the ITU-T Recommendation P.807 - Subjective test methodology for assessing speech intelligibility. The second part (70 participants) included an additional (parallel) psycho- motor task deploying a laser-shooting simulator, in which subjects had the roles of shooters and counters. The purpose of the parallel task is to bring the testing closer to the real use of technology. Significant differences have been found in the results of the intelligibility of samples from different speakers. There were also differences in evaluation with and without a parallel task. Samples from male narrators have a significantly higher intelligibility score in the standard laboratory test but also show a greater decrease in intelligibility after engaging a parallel task.