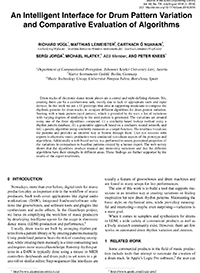 Drum tracks for electronic dance music are a central and style-defining element. But creating them can be a cumbersome task because of a lack of appropriate tools and input devices. The authors created a tool that supports musicians in an intuitive way for creating variations of drum patterns or finding inspiration for new patterns. Starting with a basic seed pattern provided by the user, a list of variations with varying degrees of similarity to the seed is generated. The variations are created using one of the three algorithms: a similarity-based lookup method using a rhythm pattern database, a generative approach based on a stochastic neural network, and a genetic algorithm using similarity measures as target function. Expert users in electronic music production evaluated aspects of the prototype and algorithms. In addition, a web-based survey was performed to assess perceptual properties of the variations in comparison to baseline patterns created by a human expert. The study shows that the algorithms produce musical and interesting variations and that the different algorithms have their strengths in different areas.