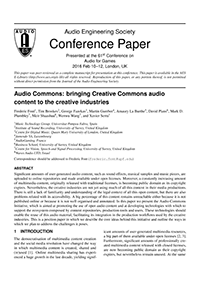 Significant amounts of user-generated audio content, such as sound effects, musical samples and music pieces, are uploaded to online repositories and made available under open licenses. Moreover, a constantly increasing amount of multimedia content, originally released with traditional licenses, is becoming public domain as its license expires. Nevertheless, the creative industries are not yet using much of all this content in their media productions. There is still a lack of familiarity and understanding of the legal context of all this open content, but there are also problems related with its accessibility. A big percentage of this content remains unreachable either because it is not published online or because it is not well organised and annotated. In this paper we present the Audio Commons Initiative, which is aimed at promoting the use of open audio content and at developing technologies with which to support the ecosystem composed by content repositories, production tools and users. These technologies should enable the reuse of this audio material, facilitating its integration in the production workflows used by the creative industries. This is a position paper in which we describe the core ideas behind this initiative and outline the ways in which we plan to address the challenges it poses.