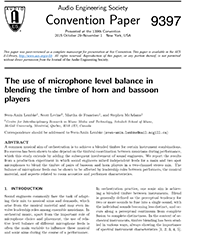 A common musical aim of orchestration is to achieve a blended timbre for certain instrument combinations. Its success has been shown to also depend on the timbral coordination between musicians during performance, which this study extends by adding the subsequent involvement of sound engineers. We report the results from a production experiment in which sound engineers mixed independent feeds for a main and two spot microphones to blend the timbre of pairs of bassoon and horn players in a two-channel stereo mix. The balance of microphone feeds can be shown to be affected by leadership roles between performers, the musical material, and aspects related to room acoustics and performer characteristics.