About Dynamic Processing in Mainstream Music 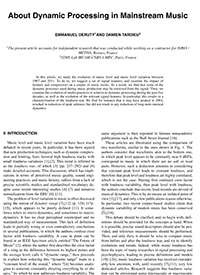 By examining attributes of recorded music over many decades, larger patterns emerge as long-term trends. The authors suggested a set of signal features and examined the impact of limiters and compressors on a corpus of music tracks. From 1967 to 1984, mainstream music production tended toward high-fidelity and transparency, as a result of technological innovations. From 1984 to 2004, on the contrary, music tended toward low-fidelity and transient degradation. While the loudness war, which may have peaked in 2004, has indeed decreased “naturalness” in mainstream music and made it louder and transients less salient, the macrodynamics remain practically untouched. In other words, there are still pianissimi and fortissimi in recent mainstream music. The origin of the “ear fatigue” phenomenon, which is sometimes associated with modern music, does not lie with the absence of musical dynamics, but may relate to the ill-defined micro dynamics.

Start a discussion about this report!