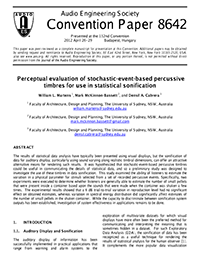 The results of statistical data analysis have typically been presented using visual displays, but the sonification of data for auditory display, particularly using sound varying along realistic timbral dimensions, can offer an attractive alternative means for rendering such results. It was hypothesized that stochastic-event-based percussive timbres could be useful in communicating the details of statistical data, and so a preliminary study was designed to investigate the use of these timbres in data sonification. This study examined the ability of listeners to estimate the variation in a physical parameter for stimuli selected from a set of recorded percussive events. Specifically, two experiments were executed to determine whether listeners are generally able to estimate the number of small pellets that were present inside a container based upon the sounds that were made when the container was shaken a few times. The experimental results showed that a 6 dB trial-to-trial variation in reproduction level had no significant effect on obtained estimates, whereas variation in spectral energy distribution did significantly affect estimates of the number of small pellets in the shaken container. While the capacity to discriminate between sonification system outputs has been established, investigation of system effectiveness in applications remains to be done.