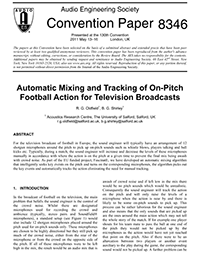 For the television broadcast of football in Europe, the sound engineer will typically have an arrangement of 12 shotgun microphones around the perimeter of the pitch to pick up just the on-pitch sounds. To prevent the mix being awash of crowd noise, the sound engineer will only raise the level of a microphone when the action is near by, this involves tracking the action and increasing/decreasing the levels of the faders correspondingly. As part of the EU funded project, FascinatE, we have developed an automatic mixing algorithm that intelligently seeks audio events on the pitch and automatically turns on the corresponding microphones for the duration of the event, eliminating the need for manual tracking.