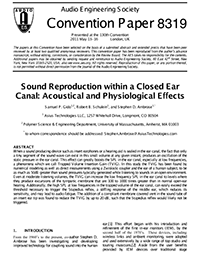 When a sound producing device such as insert earphones or a hearing aid is sealed in the ear canal, the fact that only a tiny segment of the sound wave can exist in this small volume at any given instant, produces an oscillation of the static pressure in the ear canal. This effect can greatly boosts the SPL in the ear canal, especially at low frequencies, a phenomena which we call Trapped Volume Insertion Gain (TVIG). In this study the TVIG has been found by numerical modeling as well as direct measurements using a Zwislocki coupler and the ear of a human subject, to be as much as 50dB greater than sound pressures typically generated while listening to sounds in an open environment. Even at moderate listening volumes, the TVIG can increase the low frequency SPL in the ear canal to levels where they produce excursions of the tympanic membrane that are 100 to 1000 times greater than in normal open-ear hearing. Additionally, the high SPL at low frequencies in the trapped volume of the ear canal, can easily exceed the threshold necessary to trigger the Stapedius reflex, a stiffing response of the middle ear, which reduces its sensitivity, and may lead to audio fatigue. The addition of a compliant membrane covered vent in the sound tube of an insert ear tip was found to reduce the TVIG by up to 20 dB, such that the Stapedius reflex would likely not be triggered.