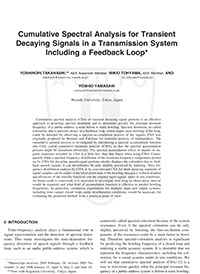 [Engineering Report] Cumulative spectral analysis (CSA) of transient decaying signal portions is an effective approach to detecting spectral distortion and to determine quickly the principal resonant frequency of a public-address system before it starts howling. Spectral distortion, so-called coloration, due to periodic delays in a feedback loop, which might cause howling of the loop, could be detected by observing a spectral-accumulation process of the signals. CSA was originally proposed by Berman and Fincham for transient analysis of loudspeakers. The cumulative spectral process is investigated by introducing a spectral accumulation function into CSA, called cumulative harmonic analysis (CHA), so that the spectral accumulation process might be visualized effectively. The spectral accumulation effect of signals or impulse responses revealed by CSA is a little less than that found when using CHA. Consequently while a spectral-frequency distribution of the dominant frequency components picked up by CHA for decaying speech-signal portions clearly displays the coloration due to feedback speech signals, it can nevertheless be only slightly perceived by listening. Thus frequency distribution analysis by CHA or by conventional CSA for short decaying segments of signal samples can be useful in the blind prediction of the howling frequency without detailed specifications of the transfer functions and the original input signals under in situ conditions. As future work is concerned, it is necessary to investigate how long an observation interval would be required, and what kind of accumulation function is effective to predict howling frequencies. In particular, simulation experiments for multiple input and output systems, including time-variant closed loops under reverberation conditions, would be necessary for evaluating the proposed method from a practical point of view.