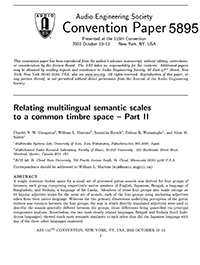 A single, common timbre space for a small set of processed guitar sounds was derived for four groups of listeners, each group comprising respectively native speakers of English, Japanese, Bengali, a language of Bangladesh, and Sinhala, a language of Sri Lanka. Members of these four groups also made ratings on 10 bipolar adjective scales for the same set of sounds, each of the four groups using anchoring adjectives taken from their native language. Whereas the two primary dimensions underlying perception of the guitar timbres was common between the four groups, the way in which directly translated adjectives were used to describe the sounds generally differed between the groups, those differences being quantified via principal components analysis. Nonetheless, the two most closely related languages, Bengali and Sinhala (both Indo-Aryan languages), showed much more semantic similarity to each other than did the Japanese language with any of the the three other languages examined.